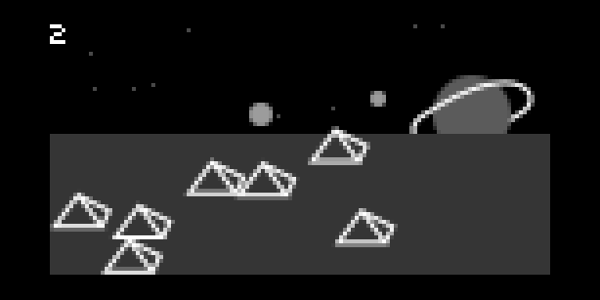 and more importantly, it sounds and works like this:

In short: it’s a sequencer that is deliberately designed to work a bit like Michel Gondry’s video for Star Guitar:

I love that video.

I’m primarily writing this to have somewhere to point at to explain what’s going on, what it’s running on, and what I did or didn’t make.

It runs on a device called norns.

norns is a “sound computer” made by musical instrument manufacturer monome. It’s designed as a self-contained device for making instruments. It can process incoming audio, emit sounds, and talk to other interfaces over MIDI or other USB protocols. A retail norns has a rechargeable battery in it, making it completely portable.

There’s also a DIY ‘shield’ available, which is what you see in the above video. This is a small board that connects directly to a standard Raspberry Pi 3, and runs exactly the same system as the ‘full-fat’ norns. (A retail norns has a Raspberry Pi Compute Module in it). You download a disk image with the full OS on, and off you go. (The DIY version has no battery, and mini-jack I?O, but that’s the only real difference. Still, the cased thing is a thing of beauty.).

norns is not just hardware: it’s a full platform encompassing software as well.

norns instruments are made out of one or two software components: a script, written in Lua, and an engine, written in SuperCollider. Many scripts can all use the same engine. In general, a handful of people write engines for the platform; most users are writing scripts to interface with existing engines. Scripts are certainly designed to be accessible to all users; SuperCollider is a little more of a specialised tool.

Think of a script as a combination of UI processing (from both knobs/encoders on the device, and incoming MIDI-and-similar messages), and also instructions to give to an engine under the hood. An engine, by contrast, resembles a synthesizer, sampler, or audio effect that has no user interface – just API hooks for the script to talk to.

The scripting API is simple and expressive. It lets you do things you’d need to do musically, providing support both for screen graphics but also arithmetic, scale quantisation, and supporting a number of free-running metro objects that can equally be metronomes or animation timers. It’s a lovely set of constraints to work against.

There’s also a lower-level thing built into norns called softcut which is a “multi-voice sample playback and recording system” The best way to imagine softcut is as a pair of pieces of magnetic tape, a bit over five minutes long, and then six ‘heads’ that can record, playback, and move all over the tape freely, as well as choosing sections to loop, and all playing at different rates. As a programmer, you interface with softcut via its Lua API. softcut can make samplers, or delays, or sample players, or combinations of the above, and it can be used alongside an engine. (Scripts can only use one engine; softcut is not an engine, and so is available everywhere.)

norns even serves as its own development environment: you can connect to it over wifi and interface with maiden, which is a small IDE and package manager built into it. The API docs are even stored on the device, should you need to edit without an internet connection.

In general, that’s as low level as you go: writing Lua, perhaps writing a bit of Supercollider, and gluing the lot together.

Writing for norns is a highly iterative and exploratory process: you write some code, listen to what’s going on, and tweak.

That is norns. I did none of this; this is all the work of monome and their collaborators who pieced it together, and this is what you get out of the box.

All I did was build my own DIY version from the official shield, and create some laser-cut panels for it:

…which I promptly gave away online.

Given all that: what is planetary?

To encourage people to start scripting, Brian – who runs monome – set up a regular gathering where everybody would write a script in response to a prompt, and perhaps some initial code.

For the first circle, the brief gave three samples, a set user interface, and a description of what should be enabled:

build a drone by locating and layering loops from the provided samples. tune playback rates and filters to discover new territory.

I thought it’d be fun to take a crack at this, and see what everyone else was up to.

A thing I’ve found in my brief scripting of norns prior to now is how important the screen can be. I frequently think about sound, but find myself drawn to how it should be implemented or appear, or how the controls should interact with it.

So I started thinking about the ‘world’ as more than just an image or visualisation, but perhaps a more involved part of the user interface, and then I thought about Star Guitar, and realised that was what I wanted to make. The instrument would let you assemble drones with a degree of rhythmic sample manipulation, and the UI would look like a landscape travelling past.

The other constraint: I wanted to write in an afternoon. Nothing too precious, too complex.

I ended up writing the visuals first. They are nothing fancy: simple box, line, and circle declarations, written fairly crudely.

As they came to life, I kept iterating and tweaking until I had three worlds, and the beginnings of control over them.

Then, I wired up softcut: the three audio files were split between the two buffers, and I set three playheads to read from points corresponding to each file. Pushing “evolve” would both reseed the positions of objects in the world, and change the start point of the sample. Each world would run individually and simultaneously, and worlds 2 and 3 would start with no volume and get faded in.

The worlds also run at different tick-rates, too: the fastest is daytime, with 40 ticks-per-second; space runs at 30tps, and night runs at 20tps.

I hooked up the time of day to filter cutoff, tuned the filter resonance for taste, and then mainly set to work fixing bugs and finding good “starting points” for all the sounds.. On the way, I also added a slight perspective tweak – objects in the foreground moving faster than objects at the rear – which added some nice arrhythmic influence to the potentially highly regular sounds.

In the end, planetary is about 300 lines of code, of which half is graphics. The rest is UI and softcut-wrangling – there’s no DSP of my own in there.

I was pleased, by the end, with how playable it is. It takes a little preparation to play it well, and also some trust in randomness (or is that luck?. You can largely mitigate that randomness by listening to what’s happening and thinking about what to do next.

Playing planetary you can pick out a lead, add some texture, and then pull that texture to the foreground, increasing its density to add some jitter, before evolving another world and bringing that forward. It’s enjoyable to play with, and I find that as I play it, I both listen to the sounds and look at the worlds it generates, which feels like a success.

I think it meets the brief, too. It’s not quite a traditional drone, but I have had times where I have managed to dial in a set of patterns that I have left running for a good half hour without change, and I think that will do.

planetary only took a short afternoon, too, which is a good length of time to spend on things these days. I’ve certainly played with it a good deal after I stopped coding. It’s certainly encouraged me to play with softcut a bit more in the next project I work on, and perhaps to keep trying simple, single-purpose sound toys, rather than grand apps, on the platform.

Anyhow – I hope that clarifies both what I did, and what the platform it sits on does for you. I’m looking forward to making more things with norns, and as ever, the monome-supported community continues to be a lovely place to hang out and make music.