Gill Sans for body copy just wasn’t working. Hoefler Text so is. My brain is set in Hoefler Text, with a side helping of Gill Sans. Of course, if you don’t have a Mac, you’ll still be in Georgia.

Things I deleted this morning

On my desktop I have a folder entitled “Odds and Ends“. This is for all that stuff that I don’t want to throw away just yet, but that doesn’t belong in my documents folder, either.

Basically, it’s stupid .avis, some PDFs of interest, and reference material I’ll never need again. This morning, I cleared it out, and deleted:

It’s quite nice to clear out. I’ve been reading 43Folders and been feeling the urge to streamline things – more time doing, less time organising. My desktop is now nice and decluttered – temporary files and aliases only – and now it’s time to go down a level, and clean out the folders. This is only the beginning.

Tiddlywiki is a wonderful, wonderful implementation of a wiki. It stacks entries one on top of another as you view them, so you can always see your history; entries can be closed when you don’t need them anymore.

When you see them stacking up, you begin to see how the information in the Wiki itself is structured; you can edit them in-place without distubring your train of thought.

The problem with Wikis is that they don’t display train-of-thought so well. Well, this one does, and I can’t wait for someone to find the killer app for it. It’s also not lost on me that it looks more like a traditional columnar weblog than most other wikis. Everyone gets weblog design; hell, everything looks like a weblog these days. Applying it to a wiki isn’t so stupid, and Tiddlywiki implements it fantastically. Who’s going to get on with the killer app, then?

New Photovore: Walkers on Brighton beach. I really like this. Hopefully will be uploading a fair few photos soon.

I was reading the recent Guardian interview with black erotica writer Zane over breakfast the other day. I commented to the girl on the reference it made to the practice of “72”ing.

(It’s like a 69, but with three fingers up the ass, apparently).

The Girl didn’t get it. She was trying to work out how two human bodies could represent a 7 and a 2 whilst engaged in, you know, sexual acts.

I was clearing up after breakfast, and had a look at what now covered the pad we write the shopping list on. Lots of two digit numbers, little cursive things, with little hands and faces.

All having sex with each other.

Every morning she thinks up new challenges. Apparently 34 looks quite good. I liked the look of 38, myself.

Think about it. Nice and cuddly.

This is why I love my girlfriend

It’s my birthday on Sunday. I got in from work and chatted to the Girl. “Oh,” she said, “I made you an apple cake”.

I don’t really like apple cake. Or tart. Or pie – unless it’s swathed in custard.

“Great,” I said. I went into the kitchen.

I hadn’t fully understood what she meant. 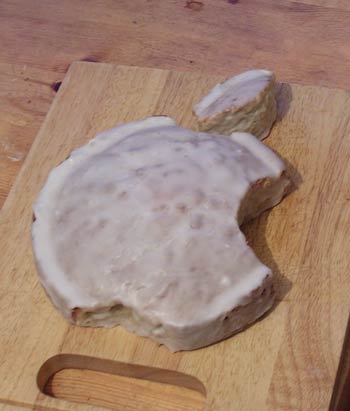 So I’ve finally signed up to a del.icio.us account. I probably should have done this a long while ago, especially given the way I think, but for some reason was put off. Anyhow, so far, I’m very impressed, and am taken by how simple it is to use.

I’m going to experiment this week; basically, anything I see that I might want to linklog, I’m going to plop into delicious. At the end of each day, I’ll run through what I tagged, and if it’s worth putting up here, then I’ll do that. It’s a preliminary filter, as it were; also, not having to log into MT saves time and concentration.

There’s a lot flying around my head at the moment. I’ve been rearranging filing systems, recently; my work computer is now remarkably tidy, and I’m about to start sorting out the Powerbook. Launchbar is part of that process; so’s this. Cleaning out my Mac desktop is going to be quite hard work.

I think the next part of the de-clut is a holiday and lots of fresh air.

Taste for makers. Great essay by Paul Graham on the importance of taste in the creation of almost anything. Lots of good essays on his site, in fact, even if you’re not a programmer.

Literature review into games and learning.